One of the first things to do when approaching the discipline of airsoft is to choose the equipment that will be used throughout the game. The main equipment piece in airsoft is the ASG (Airsoft gun).

Airsoft gun’s characteristics and level of required  maintenance will determine the ability to continue operating effectively.

There are several parameters to consider when choosing the ASG. For many people, price is certainly something that constitutes the main discriminating factor when choosing between ASGs, at least when approaching the world of Airsoft for the first time.

Mid-end quality ASGs can offer a satisfactory performance with an initial spend of around $150. Spending $350-500 can allow you the purchase of high performing, high-end airsoft rifles that will improve the experience by increasing the immersiveness of the game, thanks to mechanisms such as the gauge and the beating mass that simulates the recoil.

Finally, an investment between $700 to $1,500, will grant you the access to the so-called PTW (Professional Training Weapon), which offer an even more enhanced performance, although not significantly more superior than the one offered by some high-end ASGs.

PTWs are designed for highly specific training needs, which justify the greater investment whilst they show a lack of significant performance improvements. PTWs are meant for professional training needs, like military and police.

After addressing the price ranges, we can proceed to analyze a purely tactical-operational aspects of airsoft guns. Based on the different characteristics of ASGs, we can distinguish six different types:

Assault rifles are the most common weapons in airsoft. Examples include the M4, M16, AK47, G36, ARX160, and many more. They are rifles of varying sizes, some more compact than others. They are the initial choice of most operators since there are many on the market and they are meant to be simple to use.

Also, since the wide majority of airsoft assault rifles use the same kind of magazines, it allows teammates rely on each other for magazines supplies if one of the teammates runs out of ammo during an operation.

Machine guns are heavy ASGs, often very bulky, equipped with rather large magazines. They are primarily used to provide cover to teammates during assaults or fallback actions, or to saturate fire sectors during clashes.

They are mainly used on the ground with the help of a biped or mounted on a tripod in fixed stations or on vehicles. Some examples include MG42, M249, Browning M2, MG36.

Submachine guns are compact and lightweight ASGs, ideal for fighting in urban scenarios. Some examples include MP5, UMP9, P90, MP7, Vector. They are faster to wield than assault rifles, given their small size.

Since they are very different from each other, players need to focus on a single SMG, because if they choose to switch to another, it will probably work differently, and will require other techniques to be used.

Shotguns are ASGs that are normally rarely used but can add an element of realism to simulations or offer advantages in certain situations. Some kinds of shotguns are the M870, SPAS12, Benelli M4. Airsoft shotguns normally fire multiple shots simultaneously (3-6).

This characteristic makes the shotgun a valuable choice (tactically speaking), since it will provide a unique feature.

The ability to fire multiple shots at the same time can make it easier to shoot your opponents down in enclosed areas, increasing the cover provided by the bullets through the number of projectiles fired by the single shot.

This is not always the case in Airsoft, since in many countries the power of sniper rifles is the same as that of other rifles, making it far less useful and less performing than other categories of airsoft guns.

Nevertheless, it can be used to increase the realism of simulations, for reconnaissance and surveillance operations.

They can also be preferred in situations where it is crucial not to make too much noise, since many sniper rifles are quieter than assault rifles, MGs, SMGs, shotguns and pistols, using only the manually loaded spring, without the help of a noisy electric motors.

With proper gear preparation, which must be evaluated from case to case by an ASG mechanic, the sniper rifle can indeed be more accurate than other rifles, although often less powerful.

They are more complicated to operate than others and require more practice in using, wielding, and moving them.

Finally, the last category is pistols. Beretta M9, Colt 1911, Glock17,18,19 are among the best-known examples. Pistols are short weapons, that should always be integrated in the operator’s loadout, in addition to the long arms.

Airsoft pistols are generally less powerful than other ASGs but may be preferred in some cases due to their lite weight, manageability and for their faculty of being easily hidden.

The pistol is the element to rely on if the main weapon is unusable, due to exhaustion of ammunition, loss, malfunction, or other reasons. They normally have smaller loaders, which make them unsuitable for long-use, as they force the operator to change the magazine more frequently.

Airsoft pistols are also often less stable than long arms, because of the absence of the shoulder stock.

ASGs use pressure as a force for projectile ejection. The increase in pressure can be generated in several ways. The propulsion mechanism may be different, depending on whether the weapon uses electricity, gas or simply the manually loaded spring to eject the bullet.

In the electric and manually loaded spring-powered ASGs the pressure generated by the spring will cause the air to be directed against the bullet acting as an ejecting mechanism. In the gas-powered ASGs, on the other hand, the gas released by a valve will provide the propulsion.

Electric ASGs have an electric motor, which at the trigger’s pressure, releases compressed air from a piston inside the ASG. That action forces the bullet out of the blast chamber along the barrel and therefore out of the weapon.

Gas and CO2 airsoft guns have a tank that is responsible for gas containment. The action on the piston that propels the BB takes place through a valve which does not require the “air group” possessed by the electric ASGs, which must first recall the air to be released before it’s possible for the projectile to be pushed out of the gun.

Gas and CO2 are more powerful propulsion systems than electric propulsion mechanisms. They do not require the presence of a battery and depend solely on the availability of gas or CO2. It is worth noting, however, that such systems often do not unleash the driving force constantly.

Actually, as the gas tank empties, the firepower decreases. Usually the tank’s capacity (that is often contained in the magazine) allows someone to empty the magazine quite constantly. Nevertheless, the last shots of the magazine often appear to be ejected with less force.

Gases are easily affected by temperatures, requiring the adaptation of the type of gas to the temperature of the environment in which it will operate. Not taking such measure could compromise the proper functioning of the weapon or the fire efficiency.

In general, gas systems require more attention and more frequent maintenance. The gas is distributed in bulky cylinders equipped with a nozzle, from which the tank on the magazine or ASG is filled.

The CO2, on the other hand, is sold in small cartridges, which must be placed in specific housings normally located inside the magazines. There are also some “continuous distribution” gas systems, which connect the ASG to  a large gas container through a distribution tube, which connects the two parts, passing through the pistol grip.

There are also what is called “manual-action” compressed air systems. These are the bolt-action airsoft rifles. These are ASGs in which the spring compression takes place manually, operating on the armament lever. In this case, the action of the electric motor is replaced by the manual force of the operator.

Normally these mechanisms can be found in sniper rifles. The loading system is slower but less noisy. In general, these are less efficient systems than electric or gas/CO2 mechanisms since the reloading takes more time and the operator cannot shoot as fast as they would normally do with automatic weapons.

For those who want to get in to the world of airsoft and plan to purchase their first ASG, it is advisable to focus on a mid-range electric AR. Electrical systems are the most popular, do not require too much maintenance, offer good performance, and are not too difficult or expensive to repair.

Airsoft assault rifles are common, versatile, and comfortable ASGs. They are ideal to start with, easy to use, and they can be a good way to test the waters without investing a sizable amount in sophisticated or expensive equipment.

As the airsoft sport gets more popular from year to year, more and more people get into this awesome activity who need that initial guidance. At Air Guns Daddy, we are committed to providing comprehensive informational recourses to all the levels of airsoft enthusiasts.

Regardless of your skill level, whether you are looking for the best airsoft guns on the market, top airsoft fields near you, local airsoft stores or anything airsoft, you can find it on AirGunsDaddy.com!

Alex Davis is an outdoor enthusiast with an exceptional background in hunting, military, shooting, climbing, camping and overall outdoor activities. He did his military service in the Israeli army and proved himself as a force to be reckoned with. Moreover, Alex chose to be an outdoorsman to express himself because this is the area that inspires him the most in life. He strongly believes that nature provides a lot of opportunity for self-reflection and introspection where you dissect your life, push your limits, and come to find that you’re capable of a lot more than you thought.

Interested in becoming our expert contributor? Learn more about our Expert Contributor Program. 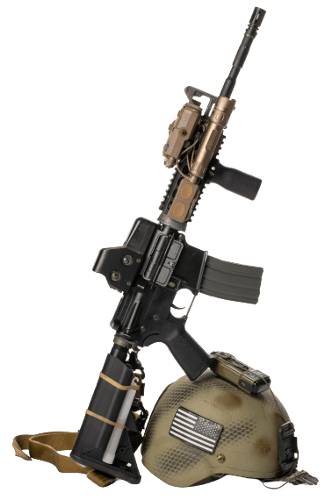